We define metadesign as an emerging framework of practice intended to enable designers to change, or to create behavioural paradigms.
See:

Why Do We Need Metadesign?

In the last few decades, trustworthy organisations, such as the World Bank, United Nations, Pentagon, etc., have made repeated warnings about the danger from climate change and extinctions. Humanity has crossed at least three of nine planetary boundaries that keep us safe (Rockström, 2015) and we are now in the era of the Anthropocene. It is clear that we need radical reform of the existing economic and political system.

If humanity is to avoid the worst scenarios we must switch from seeking, in effect, to sustain the status quo. In stead, we must create a more joined-up economic and political system that delivers ecologically regenerative outcomes (e.g. see co-sustainment). This requires radical change, yet governments habitually use methods (e.g. targets, taxes, penalties) that are too weak and indirect to change hearts and minds (Meadows, 1993).

Hypothetically speaking, existing modes of design could help governments to effect a paradigm change because designers are trained to attract behavioural change via products, services and images. The best examples of design operate at a practical way to create new affordances that make things work in a pleasing and effective way.

The unique human capacity to design probably evolved over several millions of years, during which time we acquired the skills to shape objects into tools, weapons and tokens of exchange. Our brains are, therefore, equipped to plan, reason and innovate in highly imaginative ways.

Over the last few hundred years, the emergence of industrialisation raised the economic importance of design. During the 19th century, designers smoothed the transition from a craft-based society to a factory-based system of automation and standardisation. In the 20th and 21st century, the design profession became fragmented into many separate specialisms that have helped industry to drive a huge increase in the quantity of goods and services for consumption.

Gradually, this process led to a change in the economic thinking whereby designers, who had been seen as servants of the community, became useful as foot soldiers of corporate profit and, ultimately, economic growth. In general, designers are trained to fit into the stridently humanistic and consumption-based economic system that has become as much a part of the problem as its capacity to be part of the solution.

Sustainable Products Are Not Enough

Worthy palliatives and tiny incremental changes (e.g. more recycling, electric cars and biofuels) are unlikely to save us. We also need to switch from a product-oriented mindset to designing in a more combinatorial and relational way. Ultimately, we may need to re-think design from scratch because designers are not yet trained to re-invent business models that deliver more benefits to more stakeholders, adjacent communities and ecosystems.

Paradigms are complex, self-perpetuating systems that are co-sustained by habitual processes that are part of the prevailing social, cultural, economic, aesthetic, psychological, technological and linguistic milieu. As these factors reinforce one another, they fiercely resist change unless they can be addressed in a comprehensive and joined-up way.

As paradigm change requires systemic thinking, therefore designers should be trained for this. We believe it would help them to find more comprehensive, 'joined-up' ways for society to feed, clothe, shelter, assemble, communicate and heal itself. This broad approach would also need to work in harmony with fiscal and legislative approaches. 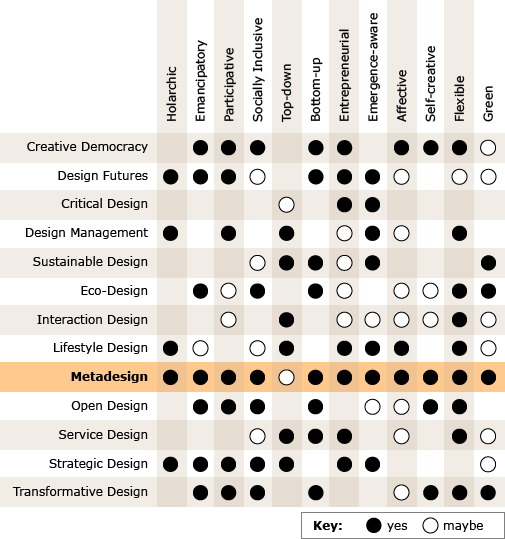 return to / go to homepage