'Keystone Synergies' is an incomplete metadesign tool that is based on eco-mimetic principles. It is designed to catalyse, or to orchestrate, a set of beneficial changes within the human habitat and culture. It is part of a quest to shift design thinking from a focus on discrete 'things' or 'events' to the metadesigning and cultivation of multiple abundances (hence our abiding interest in synergies). 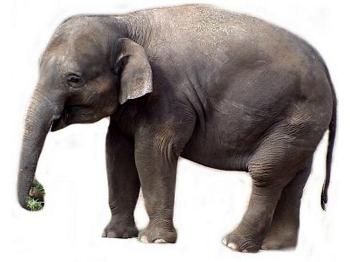 Bees and elephants are keystone species for different reasons

When seeking to re-design design it is useful to look at whole ecosystems, not just individual organisms. Our term 'ecomimetics' is, therefore, different from how many interpret the notion of 'biomimetics' (e.g. Benyus, 1997). In ecological systems, stability is made possible by biological diversification and the natural selection processes that regulate the relative numbers of individual species and organisms that make up the whole. Biodiversity itself is sustained when whole clusters of species can continue to sustain one another, often by making adjustments to complex webs of interdependency. However, some of these appear to be more important (to the whole) than others, often because of their formative role in the habitat shared by many other creatures. These are called keystone species (Paine, 1969). This explains why their demise can precipitate the loss of many other species who depend upon something they contribute to others, or to the whole system. Elephants and sea otters are keystone species because they clear away parts of the ecosystem in ways that are favourable to other species. Similarly, bees are crucially important to our own species because they pollinate the plants upon which we (and many other species) depend. Sometimes the key activities can be found in flat 'hierarchies', where the term 'keystone mutualists' suggests a high level of interdependence within the group.

In the technological domain, technical inventions by individuals, teams, or profession, open up unforeseen opportunities for further innovation. If an original invention opens the field for many successive innovations, and if these are unthinkable without the first one, it could be described as a 'keystone invention'. For example, it is hard to imagine how ultra high-speed computers would have emerged without 'keystone' innovations in semiconductors and electronics, etc. A similar parallel can be drawn with respect to the domain of synergy. The architect/inventor/engineer Buckminster Fuller coined the term synergies-of-synergies when describing the profoundly interdependent nature of the universe. This implies that many (or most?) synergies are (co)dependent with others. It therefore follows that, by artificially introducing appropriate 'key' synergies into the ecosystem, we might expect a multiplicity of other synergies to emerge.

It is relatively easy to think of relatively simple synergies that facilitate other synergies. Some of these (e.g. associated with fossil fuels) are convenient but inefficient and proving extremely harmful to our long-term wellbeing. Without 'cheap' energy, post-carbon lifestyles may need synergies that are much more local, complicated and 'joined-up'. They may be required, for example, to deliver multiple benefits to many stakeholders at the same time. Looking for synergies-of-synergies is a better way to achieve this than focusing on single inventions, products or services. Here is an example:

We have yet to conduct a large-scale practical case study, although we have argued the need for a 'synergy city' (download the article) and outlined some more specific plans for a particular town (c.f. Trimtab for Dover). One of the main difficulties of working with synergies is their ubiquity, rather than their rarity (c.f. Corning, 1983). Many synergies are so entangled in other complex synergies that we prefer to see them as separate entities. We tend to overlook them unless they are presented as simple (e.g. , 'scientific' (e.g. symbiosis), unexpected (e.g. serendipity), or dramatic and surprising (e.g. the fact that common table salt consists of a synergistic combination of 2 highly poisonous elements). Hence, when we seek to make things work together in a profitable (i.e. synergistic) way we may overlook the importance of synergistic relations within the team. We have explored this idea and coined the term sympoiesis, to describe how a team's achieving of purpose may also work in parallel with their achievement in learning how to work together more co-creatively. Arguably, sympoiesis is an example of a 'keystone synergy' because it creates the space for achieving subsequent (even better?) synergies.