The talk was given by John Wood at the Artothek Gallery, Rosental 16, Munich on 24th May 2014. 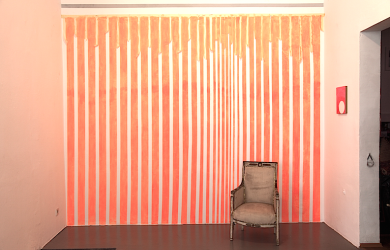 The main reason for this talk is to inform a useful discussion of this Munich-based installation art work by Alma Tischler Wood. The local context for this exhibition is the ongoing celebration of the life and work of Benjamin Thompson (1753-1814) who is probably better known as Count Rumford.

Rumford was an Anglo-American innovator who held high office in Munich between 1784 and 1798. While he introduced some radical and practical solutions to problems of poverty and nutrition, he is better known for his theories of heat, which eclipsed those of the great French scientist, Antoine Lavoisier and contributed to the Law of Conservation of Energy. Some contend that their heated debates also reflected the rivalry for the affections of Lavoisier's wife and assistant, Marie-Anne Lavoisier, with whom Rumford had a long extra-marital affair. In 1804, after Antoine Lavoisier died under the guillotine, Count Rumford married her, although it is interesting that she retained the name of her first husband.

Like a many great women, Madame Lavoisier is underrated for her contributions to new knowledge. Indeed, it is likely that her insights were very important to both of her (more famous) husbands. Unfortunately, her marriage to Rumford was stormy and fairly short-lived. And it is this more 'heated', personal side of Rumford’s life that is delicately traced out here, in Alma Tischler Wood’s installation. Alma’s installation is a kind of full-size ‘drawing’ of Madame Lavoisier’s ‘drawing room’. In English, the word ‘drawing; (in ‘drawing room’) did not refer to the making of artistic drawings. It was a place to which the ladies could ‘withdraw’ from the men, after dinner. However, Madame Lavoisier probably had no need for a safe haven from men as she was a resolute and spirited woman. Rumford may have perceived her qualities in a more negative way, describing her as 'cold, calm, obstinate, and egotistic'. In turn, he wrote that she was ‘one of the most imperious, tyrannical and unfeeling women who ever existed’.

I am not a historian, but it seems clear that 18th century science evolved under the guidance of some powerful men who took pleasure in experimentation and logical analysis. Moreover, these men part of a very long tradition of inquiry by a succession of men (rather than women). If so, how might a greater influence of feminine values and attitudes have changed the way we organise the world, today? Some feminist writers have noted, for example, the strongly solipsistic tendencies in Rene Descartes, the pitiless character of Sir Isaac Newton and the stridently misogynistic language of Sir Francis Bacon. Today, a similar drama is unfolding around a gender imbalance STEM subjects and attempts to attract more girls to these subjects. In my experience, this is a topic that can polarise opinion. Perhaps it reflects the gendered nature of how science evolved.

There are many reasons why a better gender balance in science might help mankind to survive beyond the 21st century. One reason is that there are fundamental assumptions within today's economic system (e.g. Adam Smith's theory of the law of diminishing returns) that came from the LH side of the chart. Unfortunately, even today, a numbers-based obsession with profits and growth still continues to ignore the ecological realities of our habitat. In this regard, Rumford is interesting in terms of the breadth and balance of his interests. While his perverse and energetic style of pragmatism might have made him seem unscrupulous in his personal conduct, the variety and flexibility of approach enabled his innovations to function on many different levels, simultaneous. Perhaps metadesigners can learn from the diversity of Rumford's enterprises that would lead, hypothetically speaking, to an ultimate synergy-of-synergies.

Rumford and the Enlightenment

For the above reasons, Count Rumford does not conform to the stereotypical male qualities of an eighteenth century scientist. In 1789 he founded the famous Englische Garten in Munich. By the early 18th century, the English style of landscape garden had become fashionable all over Europe, usurping the symmetrical, pre-planned look of the French garden. This trend was inspired by Chinese landscapes, which sought to reflect the way that ‘natural’ systems work. Rumford’s interest in China runs slightly against the cliché of the male Enlightenment thinker who trades ‘complexity’ for ‘efficiency’. For example, in reorganising the Bavarian army he invented thermal underwear and developed more efficient ovens, candles and oil lamps. He also introduced potato cultivation into Germany and created a system of paid work for the poor. While his famous recipe for ‘Rumford's Soup’ may sound rather prosaic in today's context of smart products and a growing awareness of the importance of diet on health. Nonetheless, it is interesting that the famous experimental chef Herve This cites him as one of the founders of the molecular gastronomy movement.

In Alma's exhibition you will see a beautiful soup plate. This is an artwork by Rita Hensen that movingly conveys some of Rumford’s connections with family life. I have a feeling that it reflects his daughter’s perceptions, rather than his own.

Of course, it is no less dangerous to polarise male and female qualities as it is to suggest that Nature is somehow the 'opposite' of technology. Nonetheless, in my view it is useful to map the quantitative, physics paradigm (on the left-hand side of the diagram below) as distinct from from the life sciences on the RH side. For example, belief systems on the LH and RH sides of the diagram (below) have very different ways of creating and sustaining themselves. For example, where LH systems tend to be allopoietic, those on the RH side are autopoietic. One of the observations of Maturana & Varela is that what we may describe as 'life sciences' derive more from the tradition of dissecting dead organisms, rather than seeking to understand the world of the living in a systemic way. Judging by the curriculum in many universities today, this may still be true.

As suggested, not all of the scientists on the left-hand side of this highly simplified map are positivistic, mechanistic or over-confident. And academics may find it easy to criticise the ideologies behind certain technologies while, at the same time, using them in their daily lives. Perhaps I need to review my hypocrisy both from a short-range and a long-range perspective. While, for example, the separation of space from time by Galileo and Newton may seem like a barbaric enterprise, one might justify it as a brilliant, useful expediency that enabled rockets to penetrate their targets, including the moon. Similarly, while I believe that Descartes's abstractions (e.g. his grid system) have tended to alienate us from our immediate environments, I know that mobile phones and GPS devices are increasingly regarded as essentials, rather than luxuries.

Rumford and the Thermostat

One of the inventions Rumford worked on was a thermostat, first introduced by Cornelius Drebbel in 1620, who used a mercury thermostat to regulate the temperature of a chicken incubator. Although Rumford apparently did not do much to develop the thermostat, he was obviously aware of its potential. Today, we take it for granted that thermostats are the 'normal' way to manage the energy used to heat things. My interest in it is both technical and philosophical. (See my thermostat article of 2002). Not so long ago (January 2014) Google purchased a small design and development company – NEST – for 3.2 billion dollars. The company makes thermostats that regulate the energy used for heating our homes. (See JW's commentary).

The Thermostat with Laser Beam

While Alma's art installation explores certain interpersonal and political aspects of science, for me, an even more important context is how we manage the 'heat' of climate. Ultimately, this means devising lifestyles that are more 'joined-up' and comprehensive. Lifestyle is cannot be facilitated simply by solving engineering or design problems. Count Rumford's famous re-design of the chimney flue has enabled millions of inhabitants of drawing rooms to enjoy relatively smoke-free fires. However, like all technical improvements, we soon begin to take them for granted. I believe that artists can catalyse new ways of thinking, whether they set out to do this or not. In this sense, my intervention is a provocation, rather than a design solution. Indeed, I have taken the liberty of exploiting this situation as a way to re-think the thermostat. My contribution to the drawing room is a thermostat that I built and mounted on a wall within the exhibition. 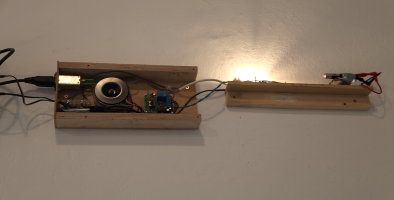 At the conceptual level, it is a deliberate intrusion into Alma's depiction of a drawing room. You may have noticed that it drives a red laser beam that coldly scrutinises the paintings as it travels around the room before returning to its original position. The length of its journey reflects the temperature of the light bulb as they (the thermost and the light bulb) switch themselves on and off. Perhaps it represents the spirit of poor Count Rumford as he tries, in vain, to understand his wife, Madame Lavoisier. In order to live well in a post-oil economy we will have to think well beyond the joyless Cartesian and Newtonian mindset that is killing us. Re-designing thermostats and clocks is a good place to start this revolution. Clocks are particularly stupid because they reflect the masculine fiction of a world that is dependably absolute and numerical. This is why we allow clock time to rule our lives. We forget that the most accurate clock does not measure anything. It is clueless as to what the sun and moon are doing. It knows even less about our tasks, beliefs or emotions. Fortunately, unlike clocks, thermostats are adaptive. However, their stupidity is that they are designed to ignore the complexity of living systems. Thus, if you boil a frog slowly enough, starting with cool water, he will die without realizing what is happening.

The Tragedy of the Thermostat The tragedy of the thermostat is that it overrides the adaptive processes that regulate our metabolisms. Our addiction to central heating and standardised weights and measures has made us forget why we feel ‘too hot’ or ‘too cold’. Perhaps it is the job of the ‘smart’, internet-connected thermostat to tease us, or to trick us, into wearing more sensible clothing, to get more exercise, or to eat better. In the 21st century, clocks and thermostats as we know them are obsolescent because they distance us from Nature and ourselves. What we need is a radical re-envisioning of these relationships; guided, perhaps, by the insights and sensibilities of artists.