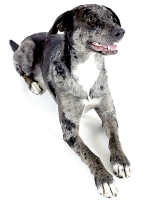 How do dogs and humans communicate?

Can we use 'language' as a verb?

How do babies learn to speak?

The 'realities' of our languages

In theory, by changing the metaphorical and syntactical structures of language (Lakoff & Johnson, 1980) we can re-attune ourselves to new 'realities'. This would be a way to change attitudes, relationships and habits of behaviour. If, when organisms encounter other creatures they find certain reciprocal actions beneficial, they may continue the process until it becomes habitual and changes their own structural integrity. Humberto Maturana and Francisco Varela (1980) describe this eventual state as 'structural coupling', where the term 'structure' refers to the sum of essential elements within their world, as a system. It therefore includes the vital organs, metabolic, sensory and cognitive processes, in addition to all of the symbolic, or semantic codes and values that sustain its living state. The level of structural coupling is co-managed by the organisms, each of which must balance its own benefits of coupling, with the risk that they might hold for its own, structural identity.

EXAMPLE: George Monbiot proposes action via re-naming - he expressed alarm about the lack of urgency in current debate, despite environmentalists having "tried everything' to get to people's hearts and minds. On 1/11/2018 he published this list on Twitter:

Jakob von Uexküll (1864-1944) was a pioneer in exploring how different organisms established what we might see as working relations (i.e. 'structural coupling') despite their very different habits and protocols. Von Uexküll knew that each living creature experiences the world differently, because of differences in their sensory organs and nervous systems. This approach borrows from empirical philosophy, which assumes that our experience consists of sensory data from the ‘outside world’, and which arrives at the brain after mediation by the particular sensors and processors of the nervous system. He therefore coined the term ‘umwelt’ (von Uexküll, in Ingold, 2011, p. 64) to describe the subjective ‘reality’ of this experience, noting that each individual creature has a characteristic repertoire of awareness. In the case of humans, we have managed to augment our experiential reach with technological sensors, and other prosthetic devices. As humans, we may also realise that different languages and cultural contexts can heighten our awareness of specific phenomena.

Structural coupling is managed through what Humberto Maturana calls 'languaging' (Maturana, 1978). This can be described as the reciprocal, meaning-making activity by which adjacent organisms first create, then settle on, a workable code of communication. It is important to emphasise that this process is part of each organism's survival repertoire. It is, however, not an individual process of 'self-ex

The idea of Languaging Change