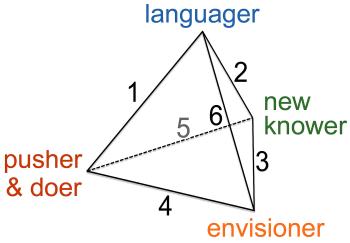 By mapping the four styles as a tetrahedron (see Figure 2) we were then able to identify their six relations as follows:

Our team tool approach used four virtual roles that interact with one another to establish six interdependent relations. Together, they are intended to operate as a training model that simulates a 'living' autopoietic system. Designing the team as a cellular system meant looking for four roles that would be sufficiently useful when working interdependently. There should be the requisite level of diversity within the team and the ability of the participants to regulate the system without a permanent leader, either from within, or from the outside (c.f. Ashby 1956). Together, each should be able to play its part so that the whole team would manage its survival.