(see other tetra-tools or return to the relational learning framework) 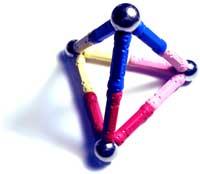 How does it help us?

What is the thinking behind it?

Things work better with the optimum number of ingredients. Juggling with too many will make us confused. But if we work with too few we may miss opportunities. Innovation in complex situations (e.g. teams, communities) can easily become difficult to comprehend. This may be because change defies the familiar boundaries of language. While thinking in 'fours' may not always show us how things 'really' are, it can inspire us to work beyond the 'thinkable'.

How does it work?

When trying to grasp a given system in a simple way, choose four interdependent (or co-creative) elements. Visualise, or represent them as four, colour-coded nodes (vertices) on a tetrahedron (e.g. see above). In a working situation it may be reasonable to consider including yourself in this 'world model' (see quadratic ethics). How have we applied it? 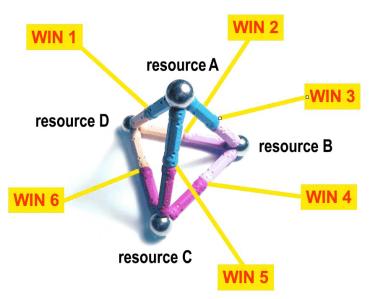 Moving from 2D to 3D

Human history has made us so accustomed to social/organizational hierarchies that we tend to assume they are 'natural'. When we speak of 'democracy' (e.g. ancient Greece or Iceland) we usually overlook the enormous scaling-up of national superpowers that are democracies. With the growth of hierarchies comes a reduction in what we call the consciousness of the network. (download article on Network Consciousness. Where some network theory explores what happens in social groups of over 100 (e.g. Dunbar's number) is approximately 150) this tool explores much smaller groups, or teams, of participants.