How Many Dimensions Does Design Ethics Need?

An article by John for a new design journal at KHiO, Oslo, Norway 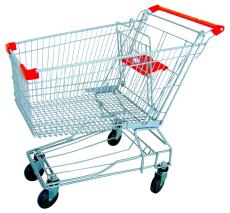 What responsibilities do we have, as twenty-first century consumers? Where most of us are fairly clear about our rights, shopping seems virtually 'duty-free'. This state of imbalance, or disconnectedness, between rights and responsibilities was not always so. A few hundred years ago, they were inseparable.

How can designers develop socially responsible working methods within a socially irresponsible economic system? While this is a basic ethical questions, some of the greatest philosophical thinkers seem to be unhelpful. For example, deontological ethics (from a Greek word meaning the 'way of obligation') is a rule-based, rather than an outcome-based approach. Immanuel Kant (1724-1804) argued that we must act purely from duty. But his idea of virtue was based on a religious conviction that led him to polarize 'good' and 'bad'. Kant reasoned that, if only God can be perfect, then humans are irredeemably imperfect. This is a 'formalistic' approach, in that it draws more attention to the form (e.g. the particular book, commandment, or 'letter of the law'), rather than to the deeds that the form inspires. Judging by our long history of religious wars, this kind of ethics has been of mixed success.

Compared with Kant's rule-based ethics, design is a more outcome-based system of rights and responsibilities. Aristotle (384-322 BC) said that the raison d'être (or ultimate cause) of the act of designing is a state of affairs that exists in the future. In this sense, the ethics of design is more 'consequential' than 'deontological'. This gives designers some liability for the outcomes of their designs, even though they could not, reasonably, be expected to foresee how others will respond to them. But, reasonably speaking, while there can be no categorical certainty about the designer's responsibility, his, or her, imagination should enable her/him to be aware of implications that the client may not foresee. The idea of 'affordances' (c.f. Jakob von Uexküll, in Ingold, 2011; Gibson, 1977; Norman, 1988) is very useful, here, as it offers a framework of understanding that maps the possible outcomes of for a given design, in the context of how others are likely to put it to use.

Unlike deontology, in order to understand the affordances of designing, it is necessary to take an empathetic view of other people, and how they might see the world. Where deontology is a 'one-dimensional' approach, designing by using affordances is a two-dimensional system, at least. It requires the designer to: a) be self-reflexively aware of her/his own habits, values, tastes, and preferences, b) be self-reflexively aware of another person (e.g. client, stakeholder or user) and her preferences, etc.. It is only by understanding the relationship between a) and b) that the designer can make useful judgements that produce a beneficial, or pleasing, outcome for others.

Why user-centred design is not enough

Of course, designers are smart, so they do understand that 'responsibilities' are not only to the client, but also to the 'users', and to the world as a whole. (download more about this). Here is where it gets more messy, as we tend not to have a way of describing really complex situation. What we need is a more 'symbiotic' approach within design (c.f. Margulis, 1968). John Ruskin (1819-1900) made some useful steps towards this when he wrote about a four-fold system (Ruskin, 1851) that I have illustrated as a tetrahedron (see figure 1).
He defines four 'players':

In the figure (below), the silver spheres represent the (4) players, and the (6) coloured links represent their interrelations. In other word they are the rights and responsibilities that exist between each pair. 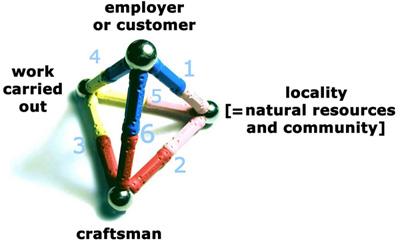 In the above illustration, the relations between the four players/agents are represented by the six edges:

Ruskin's concept applies very well to designers and the complex system of relations within which they practice. We have used a more elaborate model for the learning and assessment format of our MA in Design Futures (2005- ). Our system uses four key qualities, each of which has an ‘inward-facing’ and an ‘outward-facing’ aspect.