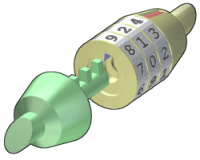 John Ruskin's description of the craft activity as a system is co-dependent, tetrahedral and therefore quadratic. It defines the craftsman’s pride in his work as affording benefits at four locations.

A similar example is the The Walking Bus, which can be seen to yield at least 4 benefits - for example: