FOUR reasons why FOUR is auspicious

OVERVIEW - Organisations can become more adaptable when they cluster and recombining more of their assets at an optimum scale. There are several advantages of organising these assets in clusters of around 3 to 5. For one reason, the organisational consciousness of small teams is very high, compared with large, multilayered organisations. Combining existing assets can create new synergies and the ratio of synergies:assets is higher in clusters of more than 3. On the other hand, the human mind finds it hard to envision the simultaneous combination of more than 4 interdependent parts.

The quartets tools help organisations to map out and/or design an optimum number of synergies at a scale that is manageable for the human mind.

A DEFINITION - by 'quartet' we mean any group of four, whether persons or things. We are particularly interested in the broad principles behind it, rather than in, say, its musical or theatrical associations (see figure 1). For the sake of visual clarity we often represent it in the form of a geometrical figure (see figure 2). We use it to map the (4) 'players' (or 'assets' ) which are represented by the silver spheres. The relations between them are thus represented by the (6) coloured rods. See Wikipedia or Wolfram for more information. (Bucky Fuller)

We might think of inventing as an activity that fulfils certain unspoken rules or assumptions. Thus, the stereotypical act of invention is that which culminates in a single gadget or product and either reduces the workload, or makes life more convenient. In this sense we might describe this stereotypical activity as a 'genre'. However, it is generally accepted that all creative acts come about as the result of combining at least two sources of data or understanding (e.g. Koestler, 1964). The same mathematics applies to the creation of synergies. We need at least two assets to combine, before we achieve one synergy. But this sum (1+1=3) appears to be a relatively poor deal if we regard it as putting two existing assets together to produce only one additional outcome (see the Synergy Toolbox). The #Synergy6 Framework seeks to improve on this format by re-inventing the paradigm of invention. Instead of starting with two assets it advises organisations to cluster at least three together to produce additional outcomes. 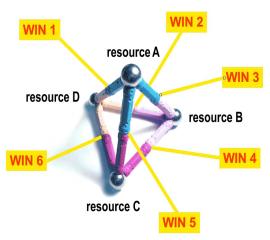 The tetrahedron shows that four assets can combine to create 2 additional 'relations', or 'combinations' than we started with. If these combinations are useful, they are then regarded as synergies. By clustering at least four well-chosen assets we can begin get more synergies than assets. The aim is to human mind is not very good at visualising (and mentally juggling) very many elements at the same time. In our view, the quartet has an optimum number of interdependent 'players' or 'ingredients', or 'parts'.

Combining many edible ingredients when cooking is relatively easy when the recipes have evolved over a long period of experimentation and note taking. However, the logic of recombination shows us that, hypothetically speaking, anything can be combined with anything. hings work better with the optimum number of ingredients. Juggling with too many will make us confused. But if we work with too few we may miss opportunities. Innovation in complex situations (e.g. teams, communities) can easily become difficult to comprehend. This may be because change defies the familiar boundaries of language. While thinking in 'fours' may not always show us how things 'really' are, it can inspire us to work beyond the 'thinkable'.
It shows how the number 'four' is helpful within creative thinking and planning.

How does it work?

When trying to grasp a given system in a simple way, choose four interdependent (or co-creative) elements. Visualise, or represent them as four, colour-coded nodes (vertices) on a tetrahedron (e.g. see above). In a working situation it may be reasonable to consider including yourself in this 'world model' (see quadratic ethics). 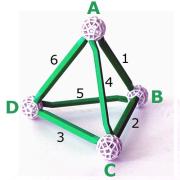 How have we applied it?

Moving from 2D to 3D

Human history has made us so accustomed to social/organizational hierarchies that we tend to assume they are 'natural'. When we speak of 'democracy' (e.g. ancient Greece or Iceland) we usually overlook the enormous scaling-up of national superpowers that are democracies. With the growth of hierarchies comes a reduction in what we call the consciousness of the network. (download article on Network Consciousness. Where some network theory explores what happens in social groups of over 100 ((e.g. Dunbar's number) is approximately 150) this tool explores much smaller groups, or teams, of participants.

Return to The CP Toolbox)
Return to home