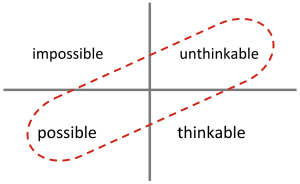 "he/she didn’t know it was impossible, so went ahead and did it" (French saying).