Some people speak of 'game-changing' instead of 'paradigm changing'. This is a nicer term, but we still use the word 'paradigm', because its older meanings enrich the way we currently use it. (see our notes on paradigm).

Paradigm change embraces virtually everything, including the assumptions, inflections and habits that have become 'normal' (and, often, invisible to us). In short, everything needs a radical service check and a re-fit, all the way down to the last nut and bolt – and beyond. While current ‘realities’ are based on GDP, jobs, growth, and ‘economies-of-scale’, we need to cultivate cyclic processes that deliver wellbeing, ecological adaptation and biodiversity. Redefining wealth will lead to better business but this requires new ways to identify, and to harness, emergent synergies that transcend what we know.

In the current paradigm of ecological 'sustainability', the world is running short short of resources and it is customary to see this as a political, managerial and technological 'problems'. In the logic of a forthcoming paradigm we might choose to see these issues as a failure of the language that generates our 'reality'. Quantum physics confirms the ancient (Upanishads) maxim that the world is without name or form. By shifting from a quantifying, material assets-centred paradigm to a synergy-based paradigm we might find that the main shortage is imagination, rather than resources.
This may mean thinking beyond the imperialist grammars of ancient Greece and Rome (Platonic solids, Newtonian physics and Aristotelian categories). Perhaps we need a more eco-semiotic approach to the naming/unnaming and charting/uncharting of synergies that are ineffable, but potentially miraculous. All is possible.

Changing many things at once

Paradigm change will require integrated and parallel reforms in education, economics, science and business. It requires all of us to question the deep purpose of what we do within the prevailing ecological context. This is far too complex to be managed by reductionist analysis, tick-box agreements and ‘magic bullet’ solutions. Dreaming, and daring to share those dreams, is the only way to achieve a rapid paradigm change within a democratic system. Despite popular belief, what the world lacks is not resources, but imagination; and this is missing from our consumerist models of education and democracy.

Any radical shift in methodology brings additional complexity to the task, because synergies do not respect the familiar epistemological boundaries upon which the prevailing paradigm is based. Moreover, any significant change in the way a mission is perceived is likely to bring about a change in the collective self-identity of the team, or community, who produce it. This means being ready to be creative on more levels, and to cultivate trust in the process of creativity. 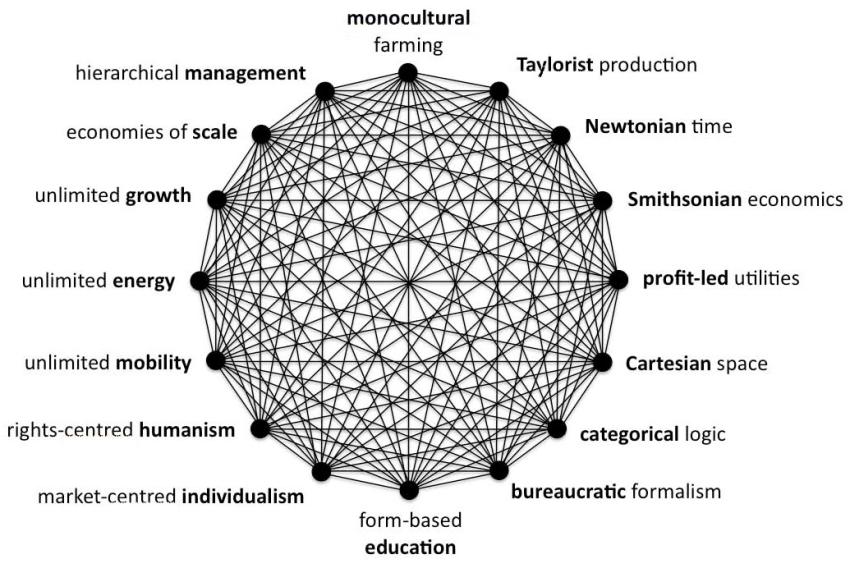 We live in a complex paradigm-of-paradigms

Each of the dots on the circle (above) represents a paradigm that is interconnected with the other major paradigms of our era. Changing these paradigms is likely to entail changing key components, probably at the same time. These separate components resist change because they act as 'vested interests' who are unable see a better way to survive, or who do not want to risk making a unilateral change within the current system.

(To see what is meant by connectedness, here, see Vandana Shiva's interview that describes it in the context of global seed distribution and the paradigm of corporate monopoly.) All paradigms are part of habits that seem justified (and serve to justify) belief systems. They resist change because they are sustained by a culture of values, perceptions, assumptions, aspirations, beliefs and other habits. It is almost impossible to grasp radically new concepts (i.e. that are outside the paradigm) unless there are new words to describe their implications. Most of us tend to stay in our comfort zone, protected by familiar language systems that reflect the past, and what we know and trust. At the institutional level, ideas are also regulated by a web of organizations, each with its own mindset. Sometimes, they overlook or reject new ideas if they represent a threat to the values or habits of the institution.

Until now, our addiction to fossil fuels has meant that we have designed our lifestyles around large-scale, centralized production systems that were designed to cut costs and to make our lives easier. However, these developments also encouraged the need for rapid mobility. A recent survey shows that the average commuter will spend six months of her life sitting in a car. A good proportion of this activity is necessary simply to sustain the transport system itself. Yet it is politically, and economically, difficult to change this pattern of behaviour, partly because well over one in ten of us earn our income from the transportation business. Business in the current era (i.e. beyond ‘peak oil’) will require us to integrate economics with ecological thinking.

BedZed Eco-village designed by Bill Dunster
One way to change this kind of paradigm is by applying what is now fashionably called ‘design thinking’ to governance. This term gives the impression that design is a generic practice designers are usually educated in one of a series of professional specialist practices. Each is designed to tackle a particular subset of the fundamental issues we must address. For example, if a graphic designer is asked to address the issue of climate change she, or he is likely to explore the role of document legibility, or better communication. If a product designer is given the same task, s/he is likely to think about useful objects. Each mode of design is therefore inclined to sustain its own paradigm of concern. Even broad categories, such as ‘service design’, still focuses on the provision of services, rather than the creation of an ecological lifestyle.

Earth house designed by Peter Vetch
This process will drastically change society, and the way we do, and see, business. In order to be ahead of these changes we will need to take some bold perspectives and imaginative insights. Current methods used in governance are unlikely to cope with what is likely to happen. Taxes, penalties and targets focus attention onto symptoms, rather than causes, and are less effective than vision-based, bottom-up approaches. However, it will be important to integrate them with top-down methods. At present, we are in a catch-22 situation. Our political systems tend to dumb-down, or scale-down the complexity and importance of ecological problems. However, nothing will change if voters remain in denial.