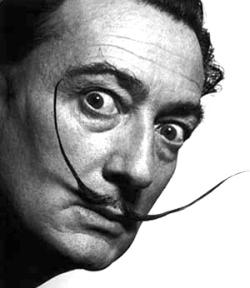 Salvador Dali once epitomised a popular image of 'the creative'

The capability to make, or the quality of making, new things by transcending traditions and usual practices or thoughts. Having a high level of inventive and/or interpretive originality, or awareness. The state of creativity may be manifest in a wide variety of forms, such as the making of a novel proposition, artefact, hypothesis, or the holding of a strikingly fresh intellectual standpoint of one's own.

The Purpose of This Glossary Entry

In seeking to satisfy a wide range of interests and intentions (e.g. in science, philosophy, anthropology or psychology), standard dictionary definitions tend to be 'flat' and generic (e.g. creativity is the origination of something new). However, the main purpose of this short entry is both pragmatic and subjective. Since the 17th century, artists, musicians and writers have been fascinated by the ideas and myths surrounding 'creativity', so it seems unrealistic to try to be 'objective'. It is pragmatic because it was compiled to help designers (or metadesigners) to practice in a more effective, ethical or comprehensive way. It does not, therefore, dwell on how to measure or understand the historical implications of creativity.

Some believe that the concept of ‘creativity’ emerged in 1689, when John Locke first argued “the mind can furnish the understanding with ideas”. Since the 1950s these ideas have been supported by the steady growth of scientific research into creativity. In the last twenty years it has become increasingly interesting to business managers, corporations, government agencies, or citizens who may commonly refer to designers as 'creatives', see the future of society as a 'creative economy', or imagine a truly creative democracy.

The Ecological Purpose of Creativity

This article suggests that the purpose of creativity is to help us to locate hitherto unforeseen opportunities, in order to adapt, better, to our habitat. See the article on creativity and biodiversity.

Some may argue that the much vaunted 'creative economy' it has now become part of the culture of competitive (industrial) advantage, rather than as a way to adapt to new situations. Often, one finds ecological terminology applied, shamelessly, to an economic context whose autonomy is seldom framed within the bigger picture. And it is increasingly associated with destructive terms, such as ‘disruptive innovation’, or ‘disruptive technologies’. These tendencies remind one of the aggressive, pitiless language of Francis Bacon (Merchant, 1980), whose crude scientific methodologies are perpetuated in some global corporations, whose products continue to threaten the survival of certain key species. The same, swaggering, solipsistic stance can also be noted from books on creativity and innovation, such as ‘Ignore Everybody’ (MacLeod, 2009) or ‘Relentless Innovation’ (Phillips, 2011).

Creativity as Part of the Will to Power

Redefining creativity is not a simple step. The destructive and egoistic models that we inherited from the Romantics remain part of the popular culture. After the Enlightenment it came to valorize individual power, originality, and - to be blunt - arrogance. David Hume (1711-1776) and others, such as Arthur Schopenhauer (1788-1860), strongly admired the notion of ‘genius’ as someone who is so extraordinarily self-styled and unfathomable that he would struggle to adapt to the ‘normal’ world around him. This also echoes Nietzsche's idea of 'Der Übermensch', which developed in the 1880’s. This theory asserted that Homo Sapiens has the potential to create a New Order, provided there is a sufficient will to power, and a readiness to reject societal ideals and moral codes. In the 20th century, inspired by psychoanalysis and by concepts such as 'positive self-regard' (Rogers, 1951), 'presentation of self' (Goffman, 1959), and 'self-actualisation' (Maslow, 1987) creativity came to be associated with the right to personal self-ex

In a sense, then, the modern sense of the word 'creativity' may mean a cynical, or arrogant refusal to adapt to anything. Perhaps this is what the architect, Frank Gehry, meant when he said, in 2005, “I don’t do context”. Today, the invitation to ‘be unreasonable’, or to ‘think different’ (presumably, a fusion of ‘be different’ and ‘think differently’) has become familiar to today’s consumers. Indeed, the Apple corporation have used it many times to advertise their computers. However, sustaining and enhancing biodiversity will require us to reflect more deeply on the shareable and distributed nature of creativity and how can help us adapt to our habitat.

Our stridently humanistic idea of creative may be traced back several thousand years to Horace, who inspired Kant’s famous phrase ‘dare to know’ (1784). And, while it had encouraged a long development of careful reason and inquiry, this was not what we would understand as 'creativity', as we understand it today. By the 17th century the idea of 'daring to know' had inspired John Locke’s radical insight (1689) that “the mind can furnish the understanding with ideas”. While the notion of ‘creative thinking’ may now be commonplace for agnostics in the 21st century, it had remained virtually unthinkable to philosophers before Hume and Locke. The idea that an individual can choose to think what s/he wants to, later acquired a powerful framework of thinking, with Coleridge’s term ‘self-consciousness’, as celebrated by a series of narcissistic ‘genius’ figures who dominated the post-romantic era in art, literature and music.