Return to Glossary / return to Mission

The Trimtab is a device used on ships and aeroplanes. It is a small, additional aileron that reduces the energy needed to help 'steer' the main steering system. How it works also offers a useful metaphor that might help individuals to understand their potential influence and importance, therefore, to act more decisively within large societies. People sometimes fail to act because they underestimate the impact their behaviour might have on outcomes. Actuallly, the level at which we estimate our behavioural influence is a good predictor of whether we, for example, choose to drive or take the bus (e.g., Heath & Gifford, 2002; Kaiser & Gutscher, 2003 in Gifford, 2011).

A trim tab is a small steering surface that adjoins the trailing edge of a larger steering surface on a boat or aircraft (see the black rectangles on the above sketch). These are used to 'trim' the controls - i.e. to compensate for hydrodynamic or aerodynamic fluctuations. Without a trim tab the control surface would move around because of changes in the speed of the vessel, or because of turbulence, etc.

A well-adjusted trim tab can reduce or remove the need for any manual force required to maintain a given position. Even when a given course is set and left in one position there may be a force needed to maintain the steering position of the wheels, etc.. By stabilising the boat or aircraft within a particular course or orientation the pilot does not need to apply a constant control force. When the angle of the tab is adjusted, relative to the larger surface, this adjusts the neutral or resting position of the main control surface. 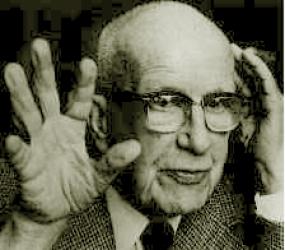 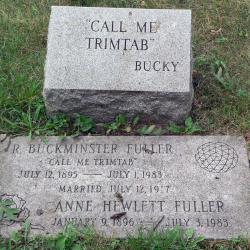 "...thinking about what one little man could do. Think of the Queen Mary—the whole ship goes by and then comes the rudder. And there's a tiny thing at the edge of the rudder called a trim tab. It's a miniature rudder. Just moving the little trim tab builds a low pressure that pulls the rudder around. Takes almost no effort at all. So I said that the little individual can be a trim tab. Society thinks it's going right by you, that it's left you altogether. But if you're doing dynamic things mentally, the fact is that you can just put your foot out like that and the whole big ship of state is going to go. So I said, "call me Trim Tab".
— Buckminster Fuller

At a systems level the principle behind steering ships is the same for all vehicles, whether they are scooters, boats or hang-gliders. All use feedback from the pilot's/driver's observation of whether the craft is on course or not. This is a corrective process, in which feedback from observation of the craft's course is used to adjust the directional setting of the wheels, sails, or rudder, etc. For example, if the vehicle is travelling too far to the left, the steerer will adjust the steering path more to the right, and vice versa. Because of the reversal process, this is called negative feedback. On a plane (see above), despite their different names, the rudder, elevator and aileron all do the same job, aerodynamically speaking. They control the direction of the wing to which they are attached. 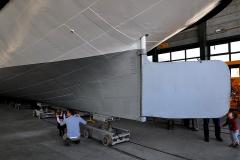 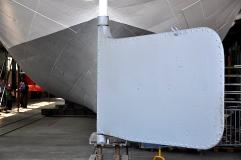 Rudder on a medium-size boat that has no trimtab

How much energy does steering need?

Whether it is a plane, a car or a ship, large vehicles take more energy to steer than smaller craft. This is why power-assisted steering is fitted to larger cars and SUVs, etc. On a vast tanker, lorry or jumbo-jet, the forces needed to steer the rudder, front wheels, or rudder are significant, and additional energy required may be beyond the strength of an unaided human driver or pilot.

Some steering systems are more complex than others. The logic needed to steer when reversing in an articulated vehicle is of a higher order than driving forward in a two, or four-wheeled vehicle. In this sense it works as a second-order cybernetic system.

Texts such as Sun Tzu’s The Art of War (6th century BC), and Macchiavelli’s The Prince (1513) are relevant here. The adjective ‘Macchiavellian’ is often used disparagingly, to mean self-serving or exploitative. However, it also describes successful actions for creating low-expenditure change. Most interventions require far less input if it is timed precisely. E.g. Try walking through a swing door at different intervals in its natural cycle - it may either hit you in the face, or allow you to pass without touching you at all. Both Macchiavelli and Sun Tzu offer a discourse that values watchful adaptability. A change that is profound enough to require (or to cause) changes on many other levels (e.g. of the culture) is called a paradigm change
FURTHER READING