Team Turns Itself Inside Out

The external agent’s temporary task normally has 4 phases of activity:

As self-imposed isolation by the External Agent begins, s/he will be required to experience the process individuation from the team. This may enable her/him to notice possible differences/conflicts with the collective view.

Once outside the group the External Agent develops an external perspective. This may be used to re-contextualise the team’s work. It may include observations of the team and, or, of external conditions, such as threats or opportunities.

3. OUTSIDE OBSERVATION - Comparison with external conditions

Having reflected upon his/her own state of being, and conditions within his/her the team, the External Agent observes relevant external conditions. This may be to see whether the original task has changed, or to note possible ways to work with other teams.

A return to the team allows feedback that may provide a ‘reality check’ for the team. The next External Agent to take over may be decided by consensus, according to the prevailing circumstances (See figure 6, below). 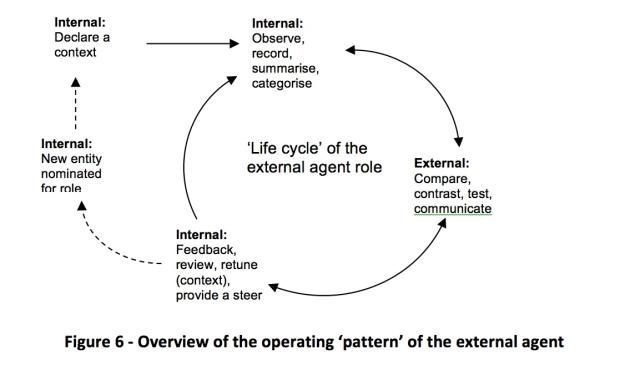 actor in a situated, active, undifferentiated state (in the flow) - can be conceived of as a verb

actor in a post-hoc, reflective, self-evaluative state - can be conceived of as a noun

See A Quadratic Model of Consciousness

Presumably, these states are the place from which we find serendipity - so how can we learn more about this?