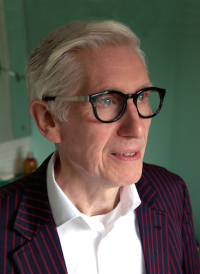 John is a Director of the Kinerji Company and Emeritus Professor of Design at Goldsmiths, University of London. His early career as an artist in the 1960s led him to use systems thinking to create installations in which museum visitors could interact with artefacts. This led him into the design of solar energy systems for domestic purposes. He has opened up some novel methodologies within design practice, via his numerous publications, articles, chapters, keynote talks and books. He is also a co-founder and co-editor of the Journal of Writing in Creative Practice. John was Deputy Head of Fine Art throughout the decade when the UK's YBA artists were finding their feet, after which he wrote some ethically-oriented design degrees at Goldsmiths, University of London. These helped to seed the current Department of Design, recently rated by the Guardian as number one in the UK. His (AHRC / EPSRC funded) research explored ways to bring design and management thinking closer together in a complex, hybrid practice he refers to as 'metadesign'. Many of these methods have been adapted and developed within the commercial context of the Kinerji Company.