"One evening, contrary to my custom, I drank black coffee and could not sleep. Ideas rose in crowds; I felt them collide until pairs interlocked, so to speak, making a stable combination. It seems, in such cases, that one is present at his own unconscious work, made partially perceptible to the over-excited consciousness, yet without having changed its nature. Then we vaguely comprehend what distinguishes the two mechanisms or, if you wish, the working methods of the two egos." Henri Poincaré (1854-1912) - Poincaré, H., & Halsted, G. B., (1902-08) 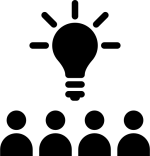