Is 'Theory' Antithetical to 'Practice'?

Aiming to elucidate some long-standing confusion

Theory and Practice as binary opposites

According to David Bohm, the clear distinction between thought and 'action' is artificial (at least, at the level of physics). This is confirmed by more recent explorations of working brains, in which both can be shown as events in the mind-body. Nevertheless, it is common to hear people polarising 'theory' and 'practice' or exaggerating their differences. This may reflect historical, cultural and political values and assumptions that echo the clear distinctions once made between slaves and their 'owners', or between servants and their 'masters'. Perhaps it is these differences that underpin the common distinction made between 'practice' (e.g. physical, or manual labour) and 'theory' (e.g. sedentary processes of reflection or thought) - especially where they lead to a number of clichés. Several of these are derogatory - implying, perhaps, that manual workers are less intelligent than managers, or that theorists are likely to be disconnected from practical capability. A slightly more balanced interpretation of these observations is that the differences can be complementary:

There is a further confusion, echoed in a similar conflict between 'reading/writing' and 'doing/making'. This reflects the fact that we have insufficient terms to map what happens when we 'design'. Although it is hard to imagine how one might design something without reading, writing, thinking, drawing, making and 'doing', there is still a lingering feeling that 'theory' is rooted in 'reading/writing' and 'practice' is rooted in 'doing/making'. 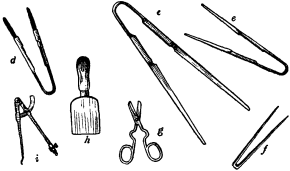 The coarseness of these distinctions is unhelpful and we need to move beyond the simplistic concepts of 'theory' and 'practice' as described above. Good design is impossible without a wise rapport (a situated cognition) that links thoughts, actions and experiences. Donald Schön created the term reflection-in-action to describe a more actively engaged mode of theory that is different from the more ponderous reflection of, say, Stephen Hawking, or Albert Einstein (see Harnessing Hidden Knowledge). Designers may be confused, partly because their traditions seem closer to the Crafts Guilds idea of 'knowing' as an outcome-oriented process, rather than with the monastic, truth-based idea of knowing, from which modern 'research' methodology evolved. Another factor is that we are short of appropriate terms to describe these important differences. Rather than identifying (design) 'practice' in opposition to 'theory' we can differentiate between the quest for 'knowledge-as-primary-outcome' and the quest for 'utilities-as-primary-outcome'. Seen from a systemic perspective, 'practice' might be characterised less by 'hands-on' activities and more by the sum of relations and agreed meanings that spread through the whole team. In any case, a better mapping of design procedures, with corresponding nomenclatures, is long overdue. 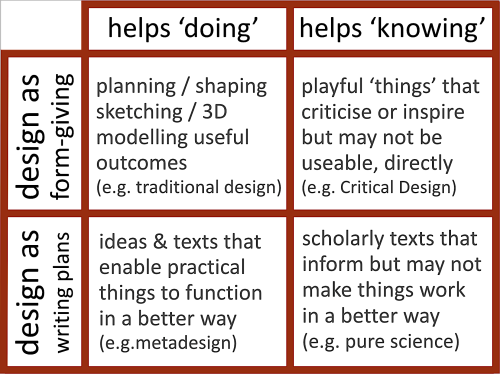 (this is unfinished work in progress).