see also other Sublime articles and a longer article about money

Many blame capitalism for the extinctions that are part of climate breakdown. But political discussions can easily reduce ecological complexities to a few human-centred dimensions. We have had several hundred years since the French aligned everyone along a ludicrous axis of 'left' and 'right'. Algorithms have recently become trendy, however, so mainstream economists are now selling 'reality' as a kind of numerical flatland. This economic mindset fails to value 'diversity' or long-term futures. But maybe the real problem is not capitalism, but money itself. We can all see that it does not trickle down to the needy, as it should. While the working poor are shopping at the local food bank, the smart money is being sucked into a black hole of hedge funds and murky derivatives.

Actually, the problem is not ideological. It is a matter of scale. It is the dead weight and momentum behind the global currency system that allows a few hollowed-out men to hold the world to ransom. For them, the future wellbeing of their grandchildren is less important than insatiable need for more zeros in their bank balances. Money works well because it 'adds up', both literally and metaphorically. Indeed, it has proven to be simple enough for monkeys to use. Unfortunately, living systems are not summative systems. Five thousand years ago, fiat money emerged as a 'super-tool' for building empires. By giving soldiers the means to travel beyond friendly territories it enabled leaders to expand their power-bases. As its users were expected to be strangers it consisted, in essence, of numbers. This proved handy for imperial authorities, who found they could exercise power at a distance, simply by instructing their legislators and accountants to manage payments, tributes and spoils. Scaling-up became a bad habit, because it encouraged humans to swap personal responsibility for systems of accountability. 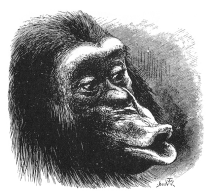 Homo sapiens has been extracting, shaping and collecting shiny ‘stuff’ from the ground for around 3 million years, so converting subtle values and relations into countable units seems ‘natural’ to the monkey brain. We fashioned hard objects into talismans, tools and weapons; prized them for their magical powers and valorised them as tokens of exchange. Humans are surprisingly inept at counting but most of us get excited by big numbers, so we always want more. As Georg Simmel put it, “regardless of the amount, the liveliness of attached hopes gives money a glow”. Unfortunately, although money consists of digits, humans find large numbers perplexing. Behavioural economists have shown that we all confuse qualities with quantities and struggle with a number of biases. Interestingly, these cognitive quirks are very similar to those of the laboratory chimps who learned to use money. This is not to say we think exactly like chimpanzees. Whereas the chimps choose to spend their cash on berries and sex, most of the world's richest men are making money out of systems designed to make more money. This is one of the main drivers behind wars, climate change and the current cascade of extinctions.

To be fair, it was the unit-based nature of money that made it more flexible than barter systems. As economists say, it enabled us to trade without a ‘double coincidence of wants’. But, our faith in the arithmetic of 'dead things' has made us forget that relations are more abundant and valuable. Whereas money consists of inanimate, storable registers that 'add up' in a predictable way, living systems are capricious and adaptive. In a relational world, diversity is our most precious resource, therefore, if money is to be re-born, it must become more combinatorial. In order to be less forgetful and insensitive it would need down-scaling. Whenever we scale-up organisations we create hierarchies. And, whenever we scale up hierarchies we create new layers of management that filter information and de-sensitise the organisation to its surroundings.

Today, cryptocurrency evangelists are telling us to have faith in the god of Blockchain. This is not such a bad idea. Distributed ledgers technology (DLT) offers us the chance to reclaim value, perhaps by dissolving the intrinsically granular, unit-based nature of money. This seems unlikely at present, judging by the common cryptocurrency lingo of 'tokens', 'work', 'mining', or 'units' that seem more akin to classical science than to the creative economy. The logic of mining makes sense if what is mined is homogeneous and plentiful. When this is the case, quantities can be distributed fairly and returns on investment can be quantified dependably. However, when extraction costs rise to the market price of the product, a predictable path to depletion makes them 'uneconomic'. This inspired the 'law of diminishing returns' in economics. It supports the pessimistic belief that we must strive, endlessly, for 'profits' and ever higher GDP. Unlike crops, livestock, or creative thought, however, mines do not 'grow'. Indeed, this explains why 'economic growth' is often the enemy of 'ecological growth'. It merely approximates to an increase in the digging rate, or in newly discovered assets being counted as 'surpluses'.

If we could bring money to life, would it help users to seek out likely partners in order to 'multiply' the opportunities for ecological regeneration? After all, this is how jokes, ideas, or new species proliferate. In some cases this can be achieved with two 'players' (making babies comes to mind, here), but two is not a magic number. 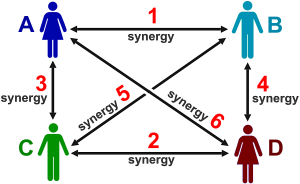 In literal terms, the word 'enterprise' suggests at least three 'players', however, the number of combinations needed is limitless. A helpful framework for mapping the process is Euler's Law, of 1751, which shows why it is more auspicious to design business models with collaborative clusters of at least four players (see figure above). In geometrical terms this transcends the flatland of unit-based money. 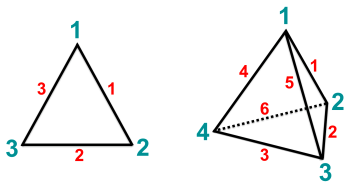 Triangles exist in two dimensions, but tetrahedra exist in a three-dimensional space (see figure above). Here, the vertices (i.e. numbers in green) depict 'players', or 'assets', and the lines (i.e. numbers in red) depict 'relations', new opportunities, or possible synergies. Here, the numbers of 'relations' exceed the number of players only when you move from flatland to the 3D world.

As Euler showed, combinations of four, as in the tetrahedron, have a 'natural surplus' of two (i.e. four players and six relations). This surplus of two is also found in subsequent polygons, as they scale-up. Ultimately, we can use this is a template for achieving a global 'synergy-of-synergies'.